This is a program to circumvent/crack the WGA (windows genuine advantage) deployed by Microsoft to ensure genuine software. Worked only for WGA versions in the year 2006 – 2007. WGA prevented users having pirated copies of windows to be able to install new programs/updates from Microsoft. However, this system, in rare occasions mistook valid users as pirated users.

The protection involved force running the WGA component right before beginning the installation of an official Microsoft product/update. The component would release a few registry keys into the registry after analyzing and corresponding with Microsoft online. Work on the program began with the Keys manually being intercepted using a kernel hook running a kernel driver to capture all registry keys being operated on (I did this using “Regmon”, Currently hosted at www.sysinternals.com. Back then, it hadn’t yet been acquired by Microsoft, if I recall correctly) The keys pertaining to the WGA components were isolated and tracked. A genuine Windows XP key was installed onto the machine using a program called RockXP. The WGA component was then run when being monitored for key activity with pre obtained knowledge about the traces of the keys. The keys were then harvested and hard coded into the program which would then emit these keys whenever required. This essentially patched any version of windows having any key to “look” like a genuine one.

As you can see, this is an incredibly simple method, there’s hardly anything technical here. There are so 100s ( or 1000s, I don’t know) of ways to protect software using complex means whose basics I wouldn’t have even been able to understand. I believe this hole was just a random fluke of a mistake that got past Microsoft. There’s no other explanation for this. This didn’t work for copies of XP that came after around 6 to 9 months after I discovered this method. They had obviously found the fluke of a hole.

OS genuinity tests work on the bootstrap level these days. I have no idea how these cracks actually get past stuff like this. I seriously adore their skills, but maybe not their motives. 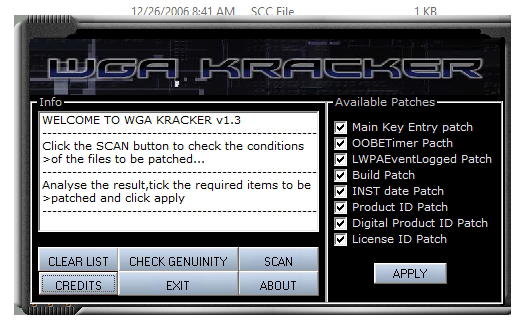 Single screened Program. All the buttons are pretty straightforward. The checkboxes indicate the different registry keys that are required to be emitted.

I did not release this program online (or for that matter, regretfully neither did I release any of my good programs online). Also, I worked on a machine with a genuine copy of windows (if you read the explanation fully- that’s how I had a genuine windows XP key). I only tested this on pirated copies. My objective for developing this was just curiosity and the intention to help people who had genuine software but still failed the WGA test. Well, I confess, I didn’t end up helping anyone because I didn’t put it online (for obvious reasons).